Sei qui: Home » News archive » MATERA, THE EUROPEAN CAPITAL OF CULTURE 2019, TRIUMPHANTLY CELEBRATES THE RETURN OF LUCIO DALLA IN A BLAZE OF MEMORIES AND INTENSE[...]

MATERA, THE EUROPEAN CAPITAL OF CULTURE 2019, TRIUMPHANTLY CELEBRATES THE RETURN OF LUCIO DALLA IN A BLAZE OF MEMORIES AND INTENSE EMOTIONS. EMOTIONAL PUBLIC DURING THE FRENCH NATIONAL ANTHEM. 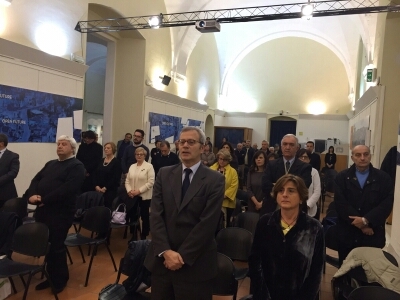 In the presence of the Prefect of Potenza, Antonio D'Acunto, and the Prefect of Matera, Antonella Bellomo, the highly anticipated cultural event, “The Tribute of Matera, the European Capital of Culture 2019, to Lucio Dalla”, organized under the patronage of the Municipal Administration, was held in the Conference Room of the Provincial Media Library “A. Ribecco”. Mayor Raffaello De Ruggieri, introduced by the Lucan Member of Parliament, Vincenzo Taddei, the brilliant conductor of the evening, stressed the importance of the contribution owed to the great artist from Bologna for Matera's candidacy for the title of the European Capital of Culture: “Lucio Dalla was an absorbing and generous character, in love with the humanistic dimension of Matera, who pledged to strongly support the candidature as its testimony. He had confirmed it publicly a few days before his sad passing. Dalla will still accompany us in the run up to 2019. This tribute event is only the initial act of gratitude.” Councillor Francesca Cangelli, a convinced promoter of the Dallian evening, recalled the many discussions with Dalla in Matera, his memorable concerts promoted in the spirit of brotherly friendship of the artist with a great gastroenterologist from Matera, Nicola D'Imperio. During the presentation of the biographical novel by Raffaele Lauro, “Caruso The Song - Lucio Dalla and Sorrento”, a stream of new and poignant memories as the result of an extraordinary and decades-long friendship, narrated gently and softly, featured the acclaimed speech of the illustrious luminary of medicine: “He came to me as a patient with his duodenal ulcer. We became close friends, confidants. Ever since he made me visit all his friends, from Morandi to Ron. I still remember when he brought Luciano Pavarotti to me for medical examination, holding him tenderly by the hand: a big man led by a little guy, two beautiful souls, two wonderful Italian artists. This beautiful book by Lauro has given me back the very humanity of Lucio. To thank me, he would sing for free at all the gastroenterology congresses I was organizing.” Intense, deep and spiritual was the speech of the Dominican father, Giovanni Bertuzzi, the confessor of the singer, who came especially from Bologna to publicly confirm the religiosity of Dalla faithfully described by the writer from Sorrento, and to remember the first years of the young clarinettist in an amateur jazz band in Bologna. The two conclusive speeches of the highest cultural level were presented by journalist Antonio Manzo, and by the regional Lucan councillor, Aurelio Pace, two essays of refined literary criticism, which truly impressed the audience. Moreover, Manzo described the figure of Raffaele Lauro as “perhaps the last example of a servant of the State and of the intellectual of the South of a national dimension”. Pace described the reading of the biographical novel by Lauro about Dalla as so rich in character, as a real antidote, especially for young people, against the widespread emotional illiteracy. Before the screening of the documentary film, “Lucio Dalla and Sorrento - Places of the Soul”, interrupted by thunderous applauses, the Sorrentine writer thanked the present authorities, organizers and Matera, calling the tour of the presentation of the book in Italy and abroad, which started in Sorrento on 28th February 2015, “a human, unique and unrepeatable experience, lived in the name of Lucio, for the people and among the people, the further confirmation of the popular roots of his musical heritage and, in particular, of his masterpiece, 'Caruso'”. The evening of intense emotions was closed in solidarity and commotion towards France and Paris, with the performance of the “Marseillaise”.