Sei qui: Home » News archive » LUCIO DALLA AND SORRENTO: THE SUMMARY OF SUCCESS IN A LETTER OF RAFFAELE LAURO TO MAYOR GIUSEPPE CUOMO. PROJECTIONS FOR 2016

LUCIO DALLA AND SORRENTO: THE SUMMARY OF SUCCESS IN A LETTER OF RAFFAELE LAURO TO MAYOR GIUSEPPE CUOMO. PROJECTIONS FOR 2016 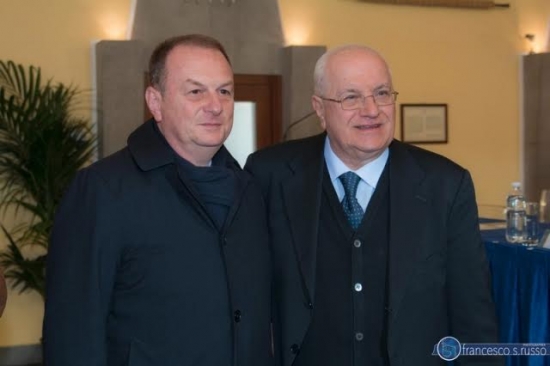 “Mr. Mayor, dear Peppino, in view of your and you co-workers’ praiseworthy and personal commitment, for which I hold constant feelings of gratitude, in the patronage and organizing of the significant events in tribute to Lucio Dalla on the occasion on both the second (February-March 2014) and the third (February-March 2015) anniversary of the death of the great artist from Bologna, whose memory remains inextricably linked to Sorrento, I wish to dutifully report to you that the tour of presentations of my biographical novel, “Caruso the Song - Lucio Dalla and Sorrento” in Italy and abroad, inaugurated by you in the Town Hall on 28th February, was an unheralded and unexpected success in terms of the critics and both local and national media. Mr. Mayor, it would be quite impossible to present all the cultural and promotional stages of this both exciting and rewarding wonderful journey, which testified and strengthened the reputation of our beloved Sorrento, with the involvement of local governments, national institutions, educational institutions, universities, foreign organizations, cultural associations, also abroad, benefiting from the patronage of the President of the Republic, in a short space of a letter. This exciting Dallian journey of 2015, which will end in Rome on 21st December, after the last events of Matera (20th November), Molfetta (27th November), Sant'Agata sui Due Golfi (3rd December), Castellammare di Stabia (4th December), Pompeii (11th December), Piano di Sorrento (12th December), San Martino Valle Caudina (18th December), and precisely Rome (21st December), leaves a vast and valuable documentation (press releases, speeches, radio and television interviews, photo galleries, reviews and comments), published and, therefore, available for those who might be interested on the website in Italian and English: www.carusothesong.com. I have to add that the captivating images of Sorrento (Piazza Tasso, Marina Piccola, Marina Grande, Excelsior Vittoria and Hilton Sorrento Palace), presented in my documentary film “Lucio Dalla and Sorrento - Places of the Soul”, have accompanied and largely contributed to the success of the presentations. I also wish to inform you that my second novel on Lucio Dalla, “Lucio Dalla and San Martino Valle Caudina - In the eyes and in the heart – Dialogues”, the unprecedented narrative continuation of the first novel, will be published in the coming days. It is precisely the ideal bridge created by Dalla and discovered by me, between our international city and the rustic village in Valle Caudina. As we all remember, at the memorable concert of 17 August 1986 during the art show organized by Gianni Raviele, Lucio sang for the first time in front of a large audience his masterpiece, “Caruso”, composed in the preceding weeks in Sorrento, in the “Caruso Suite” of the Excelsior Vittoria and in the suite at the Sorrento Palace. The book in two versions, Italian and English, will be presented in the national première at the initiative of the Municipal Administration of San Martino Valle Caudina on 18th December 2015, and will form, together with the first work and the documentary, the theme of the 2016 Dallian tour to be inaugurated in Palazzo Ducale of Presenzano on 15th January 2016, to continue in Italy and abroad. I take this much appreciated occasion to inform you that the third novel of “The Sorrentine Trilogy”, “Dance The Love - A star in Vico Equense”, dedicated to the great Russian dancer Violetta Elvin and to Vico Equense, will be published after “Sorrento The Romance” and “Caruso the Song - Lucio Dalla and Sorrento”, next spring 2016, thus completing the narrative work, with which I intended to celebrate our Sorrentine land. I wish to advise you that, with the presentation of my new book on Dalla and the great Dallian concert abroad, on 4th March 2016, there will be the anniversary of the birth of this great and unforgettable friend of Sorrento. I didn't want to occupy the date of Monday, 29th February 2016, the eve of the fourth anniversary of the death of our Lucio (1st March 2012/1st March 2016), in the hope of being able to continue, just like in 2014 and in 2015 – in the spirit of the common love we have for our city and for Lucio Dalla, which goes above everything and everyone – to commemorate him collectively in Sorrento, perhaps with a big demonstration of solidarity in favour of the weakest. For this, dear Mayor, I renew my total availability, thanking you with all my heart for Your constant attention towards me, especially in recent months, and inform you that this report of mine, which I owed to you, will be made public in the view of your function of the first representative of Sorrento.”