VIOLETTA ELVIN IS 92 TODAY. THE GREAT RUSSIAN DANCER, AND BRILLIANT PROTAGONIST OF THE NEW BIOGRAPHICAL NOVEL BY RAFFAELE LAURO, RECEIVED THIS MORNING WARM WISHES FROM THE SORRENTINE WRITER 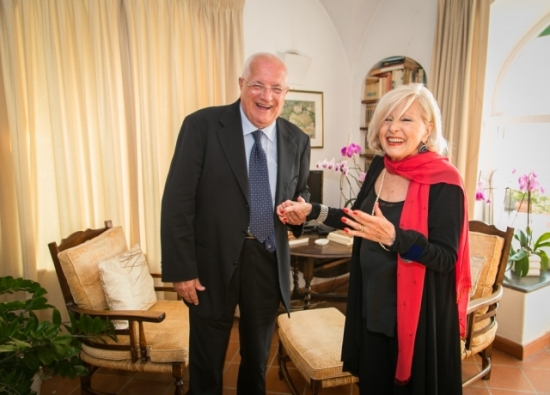 This morning, Raffaele Lauro delivered the most affectionate, heartfelt and warmest wishes to Violetta Elvin on the occasion of her 92nd birthday. Violetta Prokhorova Elvin was born in Moscow in 1923. The prima ballerina of the Bolshoi Theatre in Moscow and, later on, of the Royal Ballet of Covent Garden in London, she was one of the biggest stars of international dance, acclaimed in all major theatres of the world until 1956, when she he retired in Vico Equense to marry Ferdinando Savarese, and where she still happily lives with her son Antonio and his family. Donna Violetta is the protagonist of the new novel by Raffaele Lauro, the third and last part of “The Sorentine Trilogy” to be released in the spring of 2016, “Dance The Love - A star in Vico Equense”. The work, based on the memories of the great Russian ballerina, gathered by the Sorrentine writer, reconstructs an extraordinary career on the backdrop of World War II, from the Stalinist regime until the reconstruction, first in London and then in Italy, in Vico Equense, a wonderful gate to the Sorrentine coast.