LUCIO DALLA RETURNS TO MATERA. A TRIBUTE OF THE EUROPEAN CAPITAL OF CULTURE 2019 TO THE GREAT ARTIST FROM BOLOGNA, FRIDAY 20TH NOVEMBER 2015 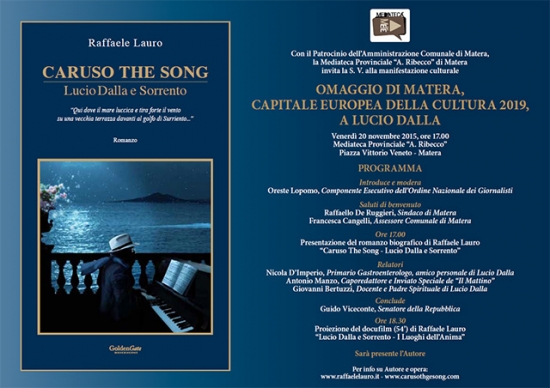 “Friends from Matera, you live in a unique place in the world, a city that I know well through the 30-year-long friendship with Nicola D'Imperio, a man of science, but also of art and culture. Matera is a miracle of time, of a harmonious contact between the past and the real time, the contemporary, it is a place where it is worth living for a while and get hold of all the information that the city transmits. The beauty of Sassi is that it is able to tell not only its past, but also the present. Be proud to be from Matera.” The fruitful relationship of the great artist from Bologna with the European Capital of Culture 2019, cultivated by his friendship with Professor Nicola D'Imperio, the citizen of Matera and the leading gastroenterologist in Bologna, was sealed with the memorable concert held with Francesco De Gregori on 19th July 2010 in the Sun Cave of Matera during the tour of “Work in Progress”. The singer-songwriter from Bologna returns to Matera starring in the event of “The Tribute of Matera, the European Capital of Culture 2019, to Lucio Dalla” on Friday 20th November 2015 at 5pm at the Provincial Media Library “A. Ribecco” in Piazza Vittorio Veneto. The event is organised by the Provincial Media Library “A. Ribecco” under the patronage of the Municipal Administration of Matera. It will commence with the presentation of the biographical novel by Raffaele Lauro, “Caruso The Song - Lucio Dalla and Sorrento”. It will be opened by the welcoming speech of Raffaello De Ruggieri, Mayor of Matera, and Francesca Cangelli, City Councilor of Matera. The evening will be introduced and hosted by Oreste Loporno, Executive member of the National Order of Journalists. Among the speakers: Nicola D'Imperio, friend of Lucio Dalla; Antonio Manzo, managing editor and special correspondent of “Il Mattino”, and Giovanni Bertuzzi, teacher and spiritual father of Lucio Dalla. The closing speech will be held by Guido Viceconte, Senator of the Republic. The event will be followed by the screening of the documentary film by Raffaele Lauro, “Lucio Dalla e Sorrento - Places of the Soul” (54’, with English subtitles). The invitation of Lucio's friends from Matera makes me truly honoured – declared Lauro – and emotional. Among so many events of my Dallian tour in 2015 in Italy and abroad, Matera holds a central place. I will attentively listen to their memories of the great friend of Sorrento, San Martino Valle Caudina and Matera .