SANT’AGATA SUI DUE GOLFI. A TRIBUTE TO LUCIO DALLA: ALL SPEECHES AT THE HIGHEST INTELECTUAL LEVEL 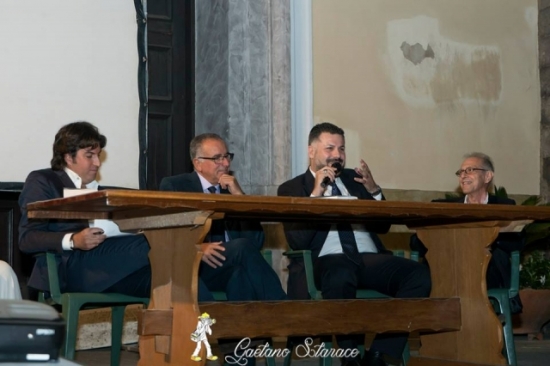 The picturesque churchyard of Santa Maria delle Grazie in Sant'Agata sui Due Golfi held the event organized by the Pro Loco in tribute to Lucio Dalla, which involved the presentation of the biographical novel by Raffaele Lauro “Caruso The Song - Lucio Dalla and Sorrento”. The fascinating evening in a crescendo of applause and emotion, masterfully coordinated by Donato Iaccarino, the enthusiast of the music of Caruso and founder of the “Salvatore Di Giacomo” Award, was inaugurated with the expressions of sincere appreciation for the initiative, with the welcome by the mayor of Massa Lubrense, Lorenzo Balducelli, who spoke at the event along with the deputy mayor, Giovanna Staiano. The speeches of the highest intellectual level, with references to James Joyce, Norman Douglas, Dante and Leopardi. Publicist Riccardo Piroddi analysed with critical strictness the relationship between the poetic of Lucio Dalla and the poetic of Giacomo Leopardi, both anchored in the inspiration drawn from the Moon, as well as in the dominant combination of Eros-Thanatos. Entrepreneur Livia Adario Iaccarino focused in particular on the inexhaustible intellectual curiosity of the great artist interested in learning about the cultural background of the Mediterranean cuisine: “Lucio was a simple, pure and authentic man!”. Nicola Di Martino, president of the political-cultural association “La Fenice”, highlighted the complex figure of the author defined as “maestro” by many generations of Sorrento, as it transpires from every page of the book, and mentioned the boundless love nurtured by Lucio Dalla for the never betrayed South. Lawyer Giuseppe Staiano, with refined and cultured eloquence, wanted to show the value of the entire narrative work of Raffaele Lauro as a tool to promote tourism in the area of Sorrento. Various speeches were cleverly interspersed by the engaging reading of a few extracts from the novel, with the deep voice of Maestro Giulio Iaccarino, and the beautiful interpretation of five hit songs of Dalla by Maestro Mario Generali, closed with the applauded masterpiece, “Caruso”.