SANT’AGATA SUI DUE GOLFI: A TRIBUTE TO LUCIO DALLA DUING THE 15TH EDITION OF THE “SALVATORE DI GIACOMO” AWARD CEREMONY 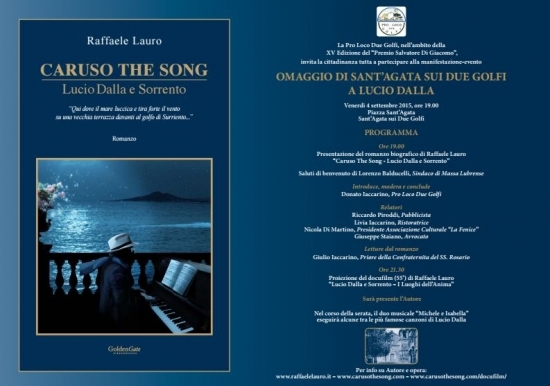 Friday, 4th September 2015 in Sant'Agata sui Due Golfi will conclude the first stage of the tour of public presentations of the biographical novel "Caruso The Song - Lucio Dalla and Sorrento" and of the documentary film "Lucio Dalla and Sorrento - Places of the Soul" by Raffaele Lauro, which started on 28 February 2015 in Sorrento (Town Hall) and continued in Rome (Senate – Palazzo della Minerva), in Cingoli (Town Hall and City Outdoor Theatre), in Naples (Palazzo Caracciolo), in Vico Equense, within the Social World Film Festival (Museum of Cinema - Old Town Hall), again in Sorrento (Hilton Sorrento Palace), in Barletta (Palace of the Prefecture) and in San Martino Valle Caudina (Town Hall). The event of Sant'Agata sui Due Golfi organized by the Pro Loco Due Golfi as part of the fifteenth edition of "Premio Salvatore Di Giacomo," will begin at 7:30pm with the presentation of the book and will be opened by the welcoming speech of Lorenzo Balducelli, Mayor of Massa Lubrense. The event will be introduced, hosted and concluded by Donato Iaccarino from Pro Loco Due Golfi. Among the speakers: publicist Riccardo Piroddi, restaurateur Livia Iaccarino, the President of the “La Fenice” Association, Nicola Di Martino, lawyer Giuseppe Staiano. Actor Giulio Iaccarino, Prior of the Brotherhood of the SS. Rosario, will read a few passages from the novel. The screening of the film in its new version for the television (54') will follow. During the evening, Maestro Mario Generali will perform some of the most beautiful songs of Lucio Dalla. The event will be attended by the delegations of Lucio Dalla's friends from San Martino Valle Caudina and Molfetta. The second stage of the tour in Italy and abroad will begin on 21st October 2015 in Sofia with the event “Sofia's Tribute to Lucio Dalla”, organized by the Italian Institute of Culture in Sofia at the Embassy of Italy in Bulgaria as part of the “Italian Culture Day” themed “Words and Music”. The other stages are planned for autumn: in Pompei, in Matera (European City of Culture 2019), in Molfetta, in San Severino Marche and in Castellammare di Stabia.