LUCIO DALLA RETURNS TO SANT’AGATA SUI DUE GOLFI: A TRIBUTE TO THE GREAT ARTIST ORGANISED BY PRO LOCO DUE GOLFI – FRIDAY, 4TH SEPEMBER 2015 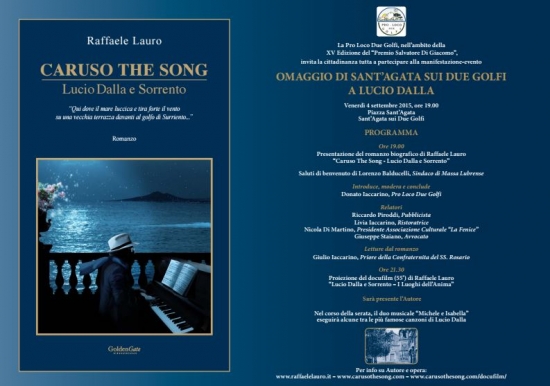 Lucio Dalla returns to Sant’Agata sui Due Golfi, where since '80s he would go to “Don Alfonso 1890”, the restaurant owned by Alfonso and Livia Iaccarino. When Lucio went there for lunch or dinner, he used to stay there until late afternoon or until night-time, engaging in passionate discussions with those two irresistible hosts, on the civilization of food or on the purity of typical products, and shared the fear that many products of Campania could be doomed to extinction, along with his beloved Mediterranean cuisine. The singer-songwriter from Bologna will be the protagonist of a tribute event “Sant’Agata sui Due Golfi Tribute to Lucio Dalla” on Friday, 4th September 2015 at 7pm, in Piazza Sant’Agata in Sant’Agata sui Due Golfi. The event is organised by Pro Loco Due Golfi within the 15th edition of the “Premio Salvatore Di Giacomo” award ceremony. The event will commence with the presentation of the biographical novel by Raffaele Lauro, “Caruso The Song - Lucio Dalla and Sorrento”. The welcoming greeting will be initiated by Lorenzo Balducelli, Mayor of Massa Lubrense. The event will be introduced, hosted and concluded by Donato Iaccarino from Pro Loco Due Golfi. Among the speakers: publicist Riccardo Piroddi, restaurateur Livia Iaccarino, the President of the “La Fenice” Association, Nicola Di Martino, criminal lawyer Giuseppe Staiano. Actor Giulio Iaccarino, Prior of the Brotherhood of the SS. Rosario, will read a few passages from the novel. The event will be followed by the screening of the documentary film by Raffaele Lauro, “Lucio Dalla e Sorrento - Places of the Soul” (new version). In the course of the evening, the musical duet “Michele e Isabella” will perform some of the most beautiful songs of Dalla. The event will be honoured by the presence of two delegations of Lucio's friends: from Barletta and from San Martino Valle Caudina. “Lucio shared the gastronomy philosophy of Alfonso Iaccarino – said Raffaele Lauro – and he was fascinated by the simplicity and transparency of the ingredients, the pillar of the Mediterranean cuisine.

The creative personality of Lucio and his musical research found a perfect harmony in the creative personality and gastronomic research of Alfonso, always flanked by the irreplaceable Livia. Lucio always said he would never renounce, among others, three of Alfonso's dishes: ravioli with fresh tomatoes, basil and Caciottina of Sant'Agata, the heart-shaped panzerottini, made of pasta raised of durum wheat and water, stuffed with ricotta cheese, and fried zucchini flowers from the Iaccarino farm, Le Peracciole, specialising in ancient cultures, clinging on the promontory of Punta della Campanella opposite the stunning beauty of Capri”.