Sei qui: Home » News archive » GAMBLING IN ITALY. A NEW AND SERIOUS ACCUSATION LAUNCHED BY RAFFAELE LAURO AT THE LOCARNO FILM FESTIVAL 2015, DURING THE PRESENTAT[...]

GAMBLING IN ITALY. A NEW AND SERIOUS ACCUSATION LAUNCHED BY RAFFAELE LAURO AT THE LOCARNO FILM FESTIVAL 2015, DURING THE PRESENTATION OF THE REPORT “LIVING THE HIGH LIFE” BY A YOUNG DIRECTOR FROM APULIA, FABIO LELI. 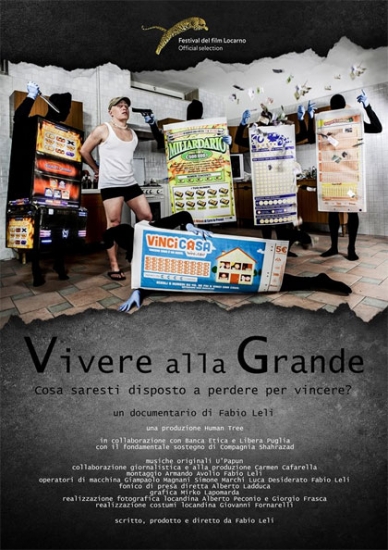 Before the out-of-competition world première of the report on gambling, “Living the High Life”, the début of a young director from Apulia, Fabio Leli, Raffaele Lauro, interviewed by the artistic director of the Locarno Film Festival 2015, Carlo Chatrian, in front of the public and the accredited press, launched from the stage of the important film festival in Switzerland a new serious accusation against the Italian government of centre-right and centre-left, to be bearing the institutional, political and moral responsibility for social devastation spreading currently in Italy in form of gambling. The film, which lasts 159 minutes, was welcomed with applause during and at the end of the projection, and only with positive feedback. Its structure is based on dramatic and painful testimonies of the victims of gambling (young, old, entrepreneurs, crushed families) and main participants, the positive ones (sociologists, psychologists, investigators and magistrates), as well as the negative protagonists of this authentic Italian tragedy. The film reconstructs, among other things, the intense institutional activity of Lauro from 2006 until 2008, as a member of the anti-usury and anti-racketeering commission, and his parliamentary activity as senator of the 16th Legislature and member of the anti-Mafia commission, with regards to: the need for strict regulation of the sector: the protection of minors; the care of gambling addicts; family support; misleading advertising; the ownership transparency of the concession companies found in tax paradises; the infiltration of organized crime; applying the anti-Mafia regulations to the holders of the arcades; the continuity between the so called legal and illegal gambling; corruption and crime factor throughout the country (usury, gold buying and trafficking of drugs); tax privileges for the concessionaires; exemption from tax return; the conspiratorial silence of information and complicit collusion of political parties. “Sooner or later – commented Lauro at the end of the projection among the journalists who congratulated him and the director – all the prime ministers and finance ministers of the Italian republic of the last fifteen years will have to answer, criminally and civilly, not only in front of the collective consciousness of the country, but in front of the Court of Ministers. This brave film of high social value, presented during a foreign festival, deserves to be screened in the Council of Ministers, in parliament and in all schools in our country.”