Sei qui: Home » News archive » SAN MARTINO VALLE CAUDINA. GIANNI RAVIELE: “THE BOOK ON LUCIO DALLA BY RAFFAELE LAURO, ALTHOUGH REVEALING ALL THE TRACES OF A NO[...]

SAN MARTINO VALLE CAUDINA. GIANNI RAVIELE: “THE BOOK ON LUCIO DALLA BY RAFFAELE LAURO, ALTHOUGH REVEALING ALL THE TRACES OF A NOVEL, IS NOT JUST A NOVEL AS MANY OTHERS, BUT A GREAT AND ACCOMPLISHED ROMANCE.” MAYOR RICCI WELCOMES THE IDEA OF RAISING A COMMEMORATIVE STAR AS A MONUMENT FOR LUCIO DALLA AND PROPOSES TO AWARD AN HONORARY CITIZENSHIP TO THE SORRENTINE PREFECT AND WRITER. 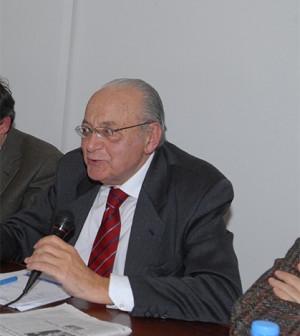 A prolonged standing ovation from the audience of San Martino Valle Caudina, gathered in the small Council Chamber of the Town Hall, after the speech by 84-year-old Gianni Raviele, the “lectio magistralis” of deep culture, refined literary criticism and solid knowledge of history of Italian music, both light and lyrical, at the presentation of the biographical novel by Raffaele Lauro “Caruso The Song - Lucio Dalla and Sorrento” in San Martino Valle Caudina. The historian responsible for the cultural division of TG1 of RAI called “Caruso” an immortal composition, a brilliant fusion of Neapolitan melody, lyric and Impressionist painting, a painting by Monet; highlighted the absolutely unique and unrepeatable relationship between Dalla and the public (“Morandi, Zucchero and Daniele had thousands of fans, Lucio had thousands of friends”), and the work of the Prefect-writer from Sorrento, as the contribution to the unveiling of the “Mystery of Dalla”, a bridge between two symbolic places of the Dallian universe (“the pearl of international tourism, Sorrento, and a small mountain village, San Martino Valle Caudina, linked with each other by the heart of Lucio”). The final judgement of the man of age, as well as the lucid and lively figure of the journalist, moved the Author: “This book, although revealing all the traces of a novel, is not just a novel as many others, but a great and accomplished romance”. Frantic applause took place also at the brilliant speech of the Deputy Head of the State Police, Prefect Matteo Piantedosi, who focused on respect nurtured by Lucio Dalla in Bologna in the years of service in the prefecture, towards the institutions, and the strategic role covered by Raffaele Lauro at the top of the Ministry of Interior, in the dramatic years of the Mafia's attack on the republic, calling Lauro, among the great servants of the state, a true “master” of rigour and spirit of service to democracy. Deep and acute was the analysis of the editor of Il Caudino, Alfredo Marro, who wanted to emphasize in particular how the book of Lauro has the advantage, among other things, to have documented in detail the Humanitas of Dalla, well known by all his friends in Valle Caudina. The young president of the Pro Loco of San Martino Valle Caudina, Domenico Pisano, effectively reminded the epic story of musical events with international artists, which took place in San Martino Valle Caudina, including the San Martino Art event hosted by Raviele. At the opening of the event, the enthusiastic organizers, the Mayor, Pasquale Ricci, and the Council Member of the Dept. of Culture, Erminio Petecca, recalled the long bond of Lucio Dalla with San Martino Valle Caudina, and the four crowded concerts, including the concert with Zucchero Fornaciari and Pino Daniele, starting from 19 August 1986, when Dalla sang his masterpiece for the first time in front of a big audience. An unpublished photo gallery of the event was on display in the Town Hall. Before the screening of the documentary film by Raffaele Lauro, "Lucio Dalla and Sorrento - Places of the Soul", the administrators presented commemorative plaques to Raviele, Lauro and Piantedosi, and raised two proposals for the future of the town: the star monument in memory of Lucio Dalla and the honorary citizenship for Raffaele Lauro. The upcoming events will be held in Locarno, on 13th August; in Cingoli, on the eve of Ferragosto, and in Sant'Agata sui Due Golfi, on 4th September: a great festival of culture and music dedicated to Lucio Dalla, organized by Pro Loco Due Golfi as part of the fifteenth edition of the "Salvatore Di Giacomo" Award.