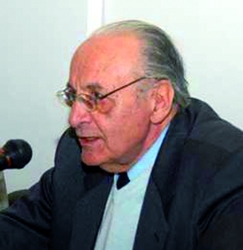 "Lucio was unspeakably curious. Thanks to his Emilian nature, he never avoided people. He got involved in conversations with others, asked them what they did for a living, what hopes they nurtured. He was intrigued by simple stories. Walking with him was like a continuous stop and go, but it was based on profound tenderness and modesty. He hated vulgarity. He had a unique way of looking at you and sniff out the situation: his face swelled like a groundhog and he raised his eyebrow. He resembled one of the comedians of the American cinema, Groucho Marx, but never made fun of anything, even if his talent led him to have many facets. He was a man of profound and vast culture, he loved painting and knew how to paint, and he loved cinema, as well as the dialectal language. I remember one evening after a concert, he got fired up about our invocation of the hungry: ‘Luna, lun, damm nu piatt di maccarun... Se nin ci mitt lu casce, ti romp la rattacasce!’. He could see in it the whole fate of the desperate South, of the land he loved with great respect and commitment. He told me that he would never forget the popular folk song and the following year, when I met him, he repeated it word for word". With these expressions Gianni Raviele, a long-time friend of the great artist from Bologna, remembered Lucio Dalla upon his death, which occurred in Montreux, on 1st March 2012. These extraordinary statements will resound tomorrow night, in the Council Chamber of the Town Hall of San Martino Valle Caudina, when Gianni Raviele, the legendary Chief Editor of the culture division of TG1 and patron of the San Martino Art festival, will conclude the anticipated presentation of the biographical novel by Raffaele Lauro, "Caruso The Song - Lucio Dalla and Sorrento", followed by the screening of the documentary film, "Lucio Dalla and Sorrento - Places of the Soul". The book will be presented by Pasquale Ricci, Mayor of SMVC, Erminio Petecca, Council Member of the Dept. of Culture of SMVC, Domenico Pisano, President of Pro Loco SMVC, Alfredo Marro, Head of "The Caudino", and Prefect Matteo Piantedosi, Deputy Chief of the State Police. www.raffaelelauro.it www.carusothesong.com www.carusothesong.com/docufilm/ ________________________________________________
* "Moon, moon, give me a plate of pasta... if you don't give me here some cheese, I will break your grater!"
www.raffaelelauro.it
www.carusothesong.com
www.carusothesong.com/docufilm/