Sei qui: Home » News archive » LUCIO DALLA RETURNS TO THE BELOVED APULIA: FRIDAY, 31ST JULY 2015, AT THE GOVRNMENT HOUSE, THE PRESENTATION OF THE BIOGRAPHICAL NO[...]

LUCIO DALLA RETURNS TO THE BELOVED APULIA: FRIDAY, 31ST JULY 2015, AT THE GOVRNMENT HOUSE, THE PRESENTATION OF THE BIOGRAPHICAL NOVEL BY RAFFAELE LAURO, “CARUSO THE SONG – LUCIO DALLA AND SORRENTO” 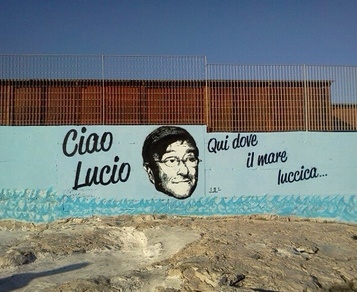 Lucio Dalla returns to the beloved Apulia. The bond of the singer from Bologna with the Apulian land and the lands of the South had old roots: the childhood summers spent in Manfredonia; the maturity stays at the Tremiti Islands, where he had a house and where he composed many of his successful albums; the knowledge of local dialects, which he didn't have a habit to reveal at the end of his concerts, but it was congenial to his poetry; his way of dealing with the public and his concept of pop music, as a fact of cultural substance, not an incident arising from experience; his human and artistic fellowship with Matteo Salvatore, a storyteller from Gargano, the authentic expression of the Manfredonian land, whom he had got to know in the early sixties, and in memory of whom Lucio participated in September 2011 in the concert in his honour, “Il bene mio” (The good of myself), held in Manfredonia. The singer from Bologna will be the protagonist of a musical tribute evening dedicated to him, taking place on Friday 31st July 2015, at 7.30pm, in Barletta, at the Government Palace (60 Via Cialdini), with the presentation of the biographical novel by Raffaele Lauro “Caruso The Song - Lucio Dalla and Sorrento”, published by GoldenGate Edizioni. The event strongly supported by the Dalla's Apulian Friends, under the patronage of the Prefecture of Barletta Andria Trani and the City of Barletta, organized by the Environment Europe Association, will be opened by the welcoming speeches of Clara Minerva, Prefect of Barletta Andria Trani, and Pasquale Cascella, Mayor of Barletta. It will be hosted by Advocate Maurizio Altomare. Among the speakers – two old friends of Dalla: La Gazzetta del Mezzogiorno journalist, Giuseppe Dimiccoli, and the head of creative services of RCA, Francesco Logoluso, who devised with Lucio, among others, the famous Manfredonian cover of the“4 marzo 1943”. The event is to be concluded by Hon. Filippo Caracciolo, Councillor of the Region of Apulia. “Lucio Dalla claimed to belong to this land, as he did to Sorrento - said Raffaele Lauro - he belonged to its roots and its culture. He was convinced that Italy would develop from Rome down, and that the soul of the South would absorb the songs by Matteo Salvatore, the authentic social flag, for the way he led his life, as an artist who gave his music a strong and provocative function of denunciation.”