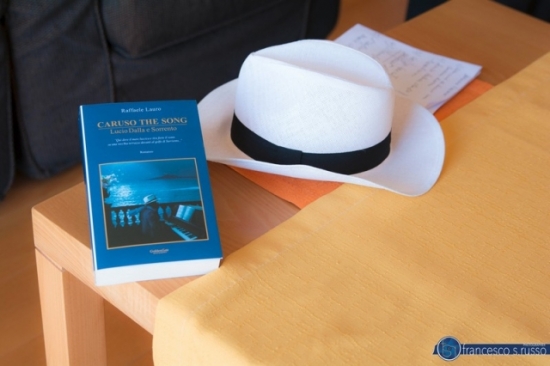 Repeated success, enthusiasm and huge emotions at the tribute evening to Lucio Dalla at the Hilton Sorrento Palace. The Ulisse Hall gathered foreign hotel guests and huge Sorrentine public during the screening of the documentary “Lucio Dalla and Sorrento - Places of the Soul”, written, narrated and directed by Raffaele Lauro, produced by GoldenGate Edizioni and created by SorrentoChannel.tv. The event was introduced by a greeting on behalf of the Russo family by the Operations Director of the spectacular hotel, Fulvia Clapier. The presentation of the work was entrusted to the essayist, Riccardo Piroddi, who in a remarkable and structured synthesis in English illustrated Lucio Dalla's bond with Sorrento, the aesthetic content of the documentary, and the profile of the Author. He presented also a dissertation on Lucio Dalla and Sorrento, prepared by a student from the Salvemini High School in Sorrento, Carmine Buonagura. The projection, interrupted by repeated applause, especially during the more emotionally engaging passages, confirmed that this documentary and other highly creative films can become a formidable instrument of regional marketing and promotion of the image of Sorrento in the world on foreign television networks. Among the many participants: local administrators, journalists, hoteliers, entrepreneurs, professionals, and many young people from the Sorrentine Peninsula. “After Vico Equense, the convinced enthusiasm manifested also in Sorrento – said Raffaele Lauro – thanks to the generous hospitality of forward-looking hoteliers, such as Giovanni and Gianmario Russo, comforts me to continue the tour of presentation of the novel and the documentary film on Lucio and Sorrento in Italy and abroad.” The next public screening of the documentary film will take place on 7th August 2015 in San Martino Valle Caudina, where Lucio Dalla sang his masterpiece composed in Sorrento, “Caruso”, for the first time in public. The tribute evening of Avellino was organized by the City Administration of San Martino Valle Caudina, at the initiative of Mayor Pasquale Ricci, and the Council Member of the Dept. of Culture, Erminio Petecca.