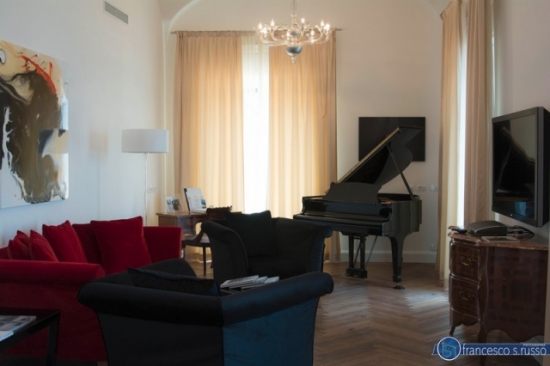 Lucio Dalla returns to Hilton Sorrento Palace, where along with the employees he participated in the memorable celebration of the tenth anniversary of the opening of this grand Sorrentine hotel. The documentary film “Lucio Dalla and Sorrento - Places of the Soul”, written, narrated and directed by Raffaele Lauro, 60 minutes long and subtitled in English, after the success of its national première (Social World Film Festival 2015) in Vico Equense, will be screened again on Wednesday, 22nd July 2015, at 9.30pm (after dinner), at the Sala Tritone hall of the Hilton Sorrento Palace in Via Sant'Antonio 13. The work is divided into five chapters: 1) Tasso Square, with the Syrenuse Bar, Bar Fauno and the Fauno Notte Club, the nightclub of Franco and Peppino Jannuzzi, where Dalla performed for the first time as clarinettist, in September 1964, with the band of The Flippers; 2) Marina Piccola, with the terrace of La Scogliera owned by Angelo Leonelli, where Dalla after a day on sea, would lounge with his guests and friends from the port; 3) Marina Grande, where in 2003 he received the Enrico Caruso Award; 4) Grand Hôtel Excelsior Vittoria, where, in August 1985, in the suite named after the great tenor by the Fiorentino family, he began composing “Caruso”; 5) Hilton Sorrento Palace, where Dalla hosted by Giovanni Russo, completed and refined his masterpiece. This special evening dedicated to the great artist was organized by the management of the Hilton Sorrento Palace for hotel guests, Sorrentine tour operators and all those who will find pleasure and interest in participating. This evening at 7:30pm there will be a broadcast on TGR Campania on the first screening in Vico Equense.