Sei qui: Home » ART, BEAUTY AND NATURE IN THE NEW NOVEL BY RAFFAELE LAURO, “DANCE THE LOVE - A STAR IN VICO EQUENSE”

ART, BEAUTY AND NATURE IN THE NEW NOVEL BY RAFFAELE LAURO, “DANCE THE LOVE - A STAR IN VICO EQUENSE” 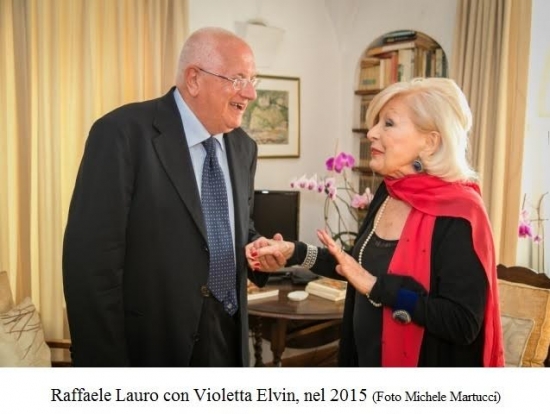 The highly anticipated novel by Raffaele Lauro, “Dance The Love - A Star in Vico Equense”, which concludes “The Sorrentine Trilogy”, will be presented in national première on Wednesday, 27th July at 7.30 pm in Vico Equense, in the square in front of the Church of the Holiest Annunciation in Vescovado Street. This significant cultural event with the choice of a symbolic location, unique in the world, is organized by the Municipality of Vico Equense within the Social World Film Festival - The International Exhibition of Social Cinema (24 - 31 July 2016). The novel tells the human and artistic story of the great Russian dancer, Violetta Elvin, born Prokhorova and widow of Fernando Savarese, who will be the guest of honour of the evening. The welcome speech will be held by the Artistic Director of the Social World Film Festival, Giuseppe Alessio Nuzzo, followed by the welcome speech of the Mayor of Vico Equense, Andrea Buonocore. The debate will be coordinated by an Il Mattino journalist, Antonino Siniscalchi. Among the speakers: Professor Salvatore Ferraro, Solicitor Giuseppe Ferraro and Professor Angela Barba. The event will be concluded by Raffaele Lauro with a thank you speech to the great artist, the inspiration for his work, and in the memory of maestro Zarko Prebil, who has recently passed away. For further information on the work visit the dedicated website in Italian and English: www.raffaelelauro.it/dancethelove/


D: Let's start with the “Muse”, the inspiration for your novel: Violetta Elvin. A great dancer who at the height of her success moved to Vico Equense for love. An artist who is still unknown to a large part of her fellow citizens. Why did you become enchanted by this woman?

R: This third novel of my trilogy, dedicated to my homeland, explicitly celebrates a great artist, but first of all a figure of a brave woman, a lover of freedom curious of the world, nature and art.  Art as the highest expression of human creativity: in music, painting and dance. I could define Donna Violetta as a “figure of the Renaissance” with an eye to the future, with the knowledge of the past. The qualities, which enchanted me, she inherits genetically from her father, an airline pilot and inventor. Donna Violetta at the age of ninety-three remains a charming woman, still with that allure of great artists. That mixture of simplicity and elegance, which makes it even today so special and so pleasant, always smiling, and yet elusive, almost shrouded in mystery.

D: However, it was Vico Equense to enchant Violetta. First at Marina d'Aequa - which alludes to a suggestive dance on the shore with the image of Botticelli's Venus in the eyes and the music of ”The Nutcracker” by Tchaikovsky in the ears – then at Mount Comune, where thanks to the words of the wind she rediscovers herself. Can you explain to us the mystery and meaning of this deep bond between Violetta and Vico Equense?

R: Violetta falls in love not only with the man of her life, but also with the landscape beauty of Vico Equense: the charm of the mountains, covered on their tops by a tangle of centuries-old fragrant flora, by woods, by unknown flowers and spread everywhere like a protective cover of a Mediterranean maquis renewed without respite; the harmony of sloping hills, the smile of which is revealed even to the most distracted eye in the glare of the sun or in the soft glow of the moon; the plane with its palaces and churches, which seems to slide slowly towards the furthest edge, lingering for a moment, just for a moment, in front of the spectacular Bay of Naples; the high coast carved over the centuries by the force of winds, rain water, rivers and outflowing of the waves, diving like the foundations of a Gothic cathedral in the azure depths of the sea waters, hidden, sometimes, in mysterious caves or revealed around solitary rocks. The Panic feeling that overwhelms Violetta Elvin on Mount Comune allows her to find the way to freedom and to regain her life choices as a woman and as an artist. In a limited space of time she revives inside, in her eyes and in her heart, the origin of the world, the fate of humanity and the myth of the Alma Mater. I was moved writing those pages!

D: The meeting with Fernando Savarese combines Violetta's love for those places with love for a man. Tell us about Fernando and his family, the Savarese, the historical entrepreneurs reaching the third generation?

R: An extraordinary family. Exceptional. From human, social, as well as entrepreneurial point of view. The initial economic activity of the Savarese family was connected to the ownership of a state concession in Vico Equense, behind Marina d'Aequa, for the exploitation of a large quarry useful to create breakwaters for port protection, and in post-war reconstructions, many of which were to be accomplished in the South. The entrepreneurial activity, therefore, took place under the strict guidance of Fernando's father, Antonio, between the quarry of Vico Equense and the port of Naples, where large wooden barges transported materials to various destinations. The five sons flanked the founder in different economic activities to continue, expand and consolidate them, also through the next generation of grandchildren: Nino, the architect, who on the coast between Castellammare di Stabia and Vico Equense built the beautiful hotel-resort complex “Capo La Gala”; Luigi, who was elected mayor of Vico Equense; Fernando, who became the CEO of the company, who built and ran the luxurious resort “Le Axidie” in the Marina d'Aequa, with the invaluable help of his brothers Giuseppe and Raffaele. In addition, the Savarese family allied with the historical shopowners, the Aponte from Sant'Agnello, to build a new shipping company, the Navigazione Libera del Golfo, designed to transport people, vehicles and goods in the gulf between Naples, Ischia, Capri and Sorrento. For me, it was a real privilege to celebrate this family, which along with many others in Vico Equense, Meta, Piano di Sorrento, Sant'Agnello, Sorrento and Massa Lubrense, has contributed to the economic and civil growth of our coast, introducing younger generations into the tourism sector.

D: The figure of Antonio Vasilij, called Toti, the fruit of love between Fernando and Violetta, emerges with fragments describing great tenderness and profound dedication to Violetta. Tell us about it.

R: Vasilij Antonio Savarese inherited elegance and tact from his mother and concreteness from his father. With solid and prestigious school education in the best colleges in Britain, he had gained a high profile training, which was very helpful when he decided to return to Italy, and to devote himself to hospitality like his father. Toti had never failed to give to his so special and so extraordinary parents his filial affection, his devotion and his gratitude, which was manifested particularly when he assisted his father, Fernando, in the course of illness, and when he comforted his mother, Violetta, after the painful death of her husband.

D: There are prominent town figures mentioned in the novel: the starred chef Giuseppe Guida, the historical manager of “Le Axidie”, Antonio Cioffi, Professor Salvatore Ferraro, scholar and expert in local history. Can you help us get to know them?

R: Guida, Cioffi and Ferraro are, among others, three extraordinary figures of Vican reality: a great chef, a great manager and a great intellectual. The professional experience of Giuseppe Guida is not unlike that of the other starred colleagues: starting from the first experiences in tourist facilities in the Sorrentine Peninsula he proceeds to study abroad (in his case at Hamilton, in Bermuda Islands, where he further increased his professional background). On his return to Vico Equense he decided to open a tavern in the courtyard of the old eighteenth-century family home, to which he gave the name of his mother, Rosa. The beginnings were not easy, but with firmness, modesty, passion, inspiration and the right amount of ambition, Guida has managed, as in a magic spell, to turn a simple pizzeria into a rustic, yet elegant venue, a recognized place of high cuisine, the promised land of fine dining enthusiasts. Antonio Cioffi, however, before beginning the ten-year collaboration with Fernando Savarese in the management of “Le Axidie”, had studied in prestigious schools in England and Scotland, working to be able to continue his education, as a waiter in two British hospitality sanctuaries, the “Savoy” in London and the “George” in Edinburgh, attended by members of the royal family and the House of Lords, as well as the elite of culture, entertainment, economics, and English and international society. Thus, he had acquired a human and professional background that made him one of the best hotel managers of the coast. Salvatore Ferraro is a refined, severe, uncompromising, and diligent intellectual, as well as a dedicated researcher among very few. He has dedicated his life, as well as to his beloved family, to teaching and study, to forming generations of students from Vico, Castelammare di Stabia and Sorrento. An irreplaceable lover of national history, with his documentary publications, dedicated to repairing the destruction caused by improvised local historians.

D: In the initial dedication, you refer to your maternal grandparents originating in the Aequan hills, described more extensively in another book: “Cossiga Suite”, dedicated to your brother, who'd passed away. Let's go back to them. Who were they and what did they do?

R: Don Raffaele Aiello, a music lover, a peasant-intellectual, a socialist like Arturo Labriola, whose name I carry, and Donna Giuseppina De Simone, semi-literate, but an energetic head-of family business, called Peppinella, had thirteen children, including Angela , my mother. They both came from the families from Massaquano: the Aiello, wealthy farmers-owners with a priest uncle, highly educated and influential at the time; the De Simone, however, more modest carpenters, artisans of wood. After getting married the two moved with children on the way year after year to a land destined to be cultivated, upstream of Marina d'Aequa, later to an orange grove in Sorrento and, finally, to the bottom of their land in Migliaro, above the Church of Sant’Agnello. My tribute to Vico Equense, via Violetta Elvin, is also my tribute to the homeland of my maternal grandparents.

D: To conclude, let’s get back to Vico Equense. This area creates the background of the majority of the book. It's a connecting town between two major tourist attractions – the Vesuvius area on one hand, with the ruins of Pompeii and Herculaneum – and on the other side, the Sorrento and Amalfi coast with landscapes and unparalleled natural beauty. What is Vico Equense today, and what can it become?

R: Vico Equense is one of the most valuable territories of the Sorrentine Peninsula from the landscape point of view. So is Massa Lubrense. My novel intends to enhance this natural wealth by attracting everyone's attention to a heritage that must necessarily be protected as the irreplaceable basis of its civilization and its economy. We need to invest more and more in regional marketing, not only in country festivals. A correct road is that of the Social World Film Festival - The International Exhibition of Social Cinema, directed brilliantly by the young director Giuseppe Alessio Nuzzo, with its sixth edition this year, which carries the brand of Vico Equense in the world.