Sei qui: Home » THE NATURAL BEAUTY OF VICO EQUENSE IN THE NEW NOVEL BY RAFFAELE LAURO, “DANCE THE LOVE - A STAR IN VICO EQUENSE”

THE NATURAL BEAUTY OF VICO EQUENSE IN THE NEW NOVEL BY RAFFAELE LAURO, “DANCE THE LOVE - A STAR IN VICO EQUENSE” 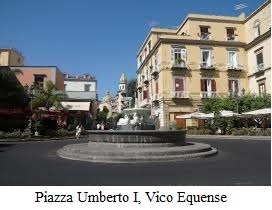 At the first reading of the drafts of the new novel by Raffaele Lauro, “Dance The Love - A Star in Vico Equense”, the third and last book of “The Sorrentine Trilogy”, the question arises whether the protagonist is the great Russian dancer Violetta Elvin, born Prokhorova and widow of Fernando Savarese, or our wonderful town, which is unique in the world and in a limited space gathers some of the most beautiful natural forms: from high mountains to the hills, from the plane to the sea. Unique in the world, precisely! Then, on reflection, we understand the “game” of the narrator, who cleverly uses feelings, emotions and impressions of the famous artist in front of the charm of visited places to encourage the reader to grasp the “magic” of the Vican land, our land. An operation not without suggestions, because it's motivated by the declared intention of Lauro to celebrate the Vican origins of his maternal grandparents. To anticipate for our readers the locations, where the symbiosis between a woman and the surrounding environment is most obvious, I put some questions to the writer, whom I thank for his availability to respond.

D: Can you remind us, when did Donna Violetta arrive to Vico Equense for the first time?

R: Violetta Elvin came to Vico Equense for the first time in 1951, at the height of her artistic success, for a short period of rest. Just for ten days. She stayed at Hôtel Aequa and explored Vico Equense from the top of Faito to Marina d’Aequa, and fell in love with the Vican land, where she returned later, after the abandonment of dance for the love of Fernando Savarese, and moved in to Palazzo Savarese, Villa Maria, on Corso Filangieri. Nobody in Vico Equense was aware of the presence of an international star of dance, a prima ballerina from the prestigious Royal Ballet company in London. The only person to know that while seeing her was the young Fernando Savarese.

D: What was the first impression of Vico Equense for Donna Violetta?

R: It was love at first sight, with a compassionate start. Violetta Elvin would have never imagined back then that Vico Equense would become the final place, where she would spend the rest of her life after the abandonment of dance career. She caught sight of Piazza Umberto I and the fountain, very different from those existing now, through the window of the bus, which stopped right on the square. She got off the bus as first, very impatient to discover the place that had been recommended by a travel agency in London for a non-summer holiday: a quiet holiday, relaxing in a pleasant location in the South of Italy. Donna Violetta still remembers with affection a few children and three women, who approached her almost fearfully to ask for alms. The war had been over for six years, but poverty was still at large, so any stranger who arrived in Vico Equense represented a possible resource, or at least a little cash. Donna Violetta confessed to me that she never forgot those troubled faces.

D: I read that Donna Violetta was immediately very fascinated by our mountains: Mount Faito and Mount Comune.

R: Precisely. Together with the people who accompanied her Violetta immediately embarked on two major mountain hikes: the first on Mount Faito, 1,131 meters high, the second on Mount Comune, 642 meters high. The group was accompanied by an elderly driver from Hôtel Aequa, where she was staying, in a dilapidated pre-war car, which seemed to be losing parts at every turn until it reached the end of the motor road.

The climb to the top of Faito and to the viewpoint, from which the group could enjoy a breathtaking, unforgettable panoramic view, was not easy, nor urged, but then one gets immersed in rich, verdant flora of Faito. It was all a succession of hollies, in the undergrowth of beech woods, conifer, pine, fir and cypress trees, almost all planted by man, chestnut trees coveted by people for the precious chestnut harvest, flour of the poor, mixed woods with other undergrowth populated mainly by ferns, alder and oak, as well as the ubiquitous Mediterranean maquis, with triumphant myrtle, mastic, strawberry trees, Viburnum, holm oak, carob, bay leaf (laurel), tree heath, rock rose, rosemary and broom. Violetta was fascinated and completely captivated by the continuous change of prospective of the Bay of Naples and the sea, which from a thousand meters in altitude seemed blending with the sky.

D: I loved the scene on Mount Comune, so realistic and spiritual, which involved me emotionally.

R: The episode with Violetta on Mount Comune is the mystery heart of the novel. It was no accident that she wanted to be alone, finally alone with herself in the midst of paradise on earth, to fill her eyes, her mind, her heart and her soul with that miracle of nature, of changing light, that cascade of hills, first green, then bleak, which rushed down along the high coast, stretched on the plane, grew larger at the ridge to plummet towards Punta della Campanella and sink in the blue sea, to then re-emerge from the waters in the backlit profile of Capri and the Faraglioni. Violetta's eyes in a few minutes went back millions of years: the large crater of fire, the prevalence of water, the consolidation of harmony, a work of art, that even the most staunch agnostic would struggle not to define divine. From that observation point of the world Violetta grasped the epic of life, the birth of pagan Venus emerging from the foam of waves, and the fate of humanity. And she made her life choices.

D: Apart from the mountains, Violetta was also able to visit the villages, but not all of them?

R: In 1951, Violetta was able to visit only a few villages. When she moved permanently to Vico Equense, however, he visited them all several times, one after another, village after village: the evocative Pietrapiana; the ancient Bonea, close to the town centre; Sant’Andrea, perched upon the slopes of the mountain; San Salvatore, around the church; the placid Massaquano, full of walnut groves; Patierno, renowned for the many dairy farms; yet again Mount Faito, green and rocky; Moiano, with its legendary origins; Santa Maria del Castello, suspended on the ridge between Vico Equense and Positano; Ticciano, full of olive groves and orchards; Preazzano, land of the celebrated eggplant; Arola, extended and perched at the same time; Alberi, the village-balcony, with the view projected towards the coast; Pacognano, dedicated to prayer; Fornacelle, with a live nativity scene at Christmas; the aristocratic Montechiaro, and finally, later, towards Sorrento, the proud Seiano, a small “kingdom in the kingdom”, almost a world in itself.

D: Marina d’Aequa has also become the beloved place of Donna Violetta. How did she discover it?

R: From the first day of her stay in Vico Equense, Violetta had expressed the desire to want to soak her feet in the beautiful sea, irresistible for her, which changed colour from green to pale blue, from sky blue to blue, up to turquoise. The sea assumed for Violetta, already since her childhood, a magic, purifying, and almost cathartic meaning. To the objections of her friends, she would reply: “The spring temperature does not allow you to bathe, swim, or explore mysterious caves, which I saw beneath the high coast, cascading over the surface of water? Fine! But at least my feet may well challenge the cold. I am used to a lot colder!”. So, having arrived barefoot to the beach of Marina d'Aequa, Violetta began to hop between small waves that stretched on the shoreline: laughing, humming, and moving like a wild child. The beach was deserted, but anyone able to see her would have mistaken her for a crazy woman. Her light skirt, although she held it up in her hands, was now drenched, and her hair was a mess. The woman, tired, exhausted but visibly happy, finally slumped on small dry pebbles. She never would have guessed that later she was to spend mornings and beautiful evenings on that beach with Fernando. In fact, Fernando and Violetta loved bathing in the sea in early morning or sometimes at sunset, when Marina d’Aequa was becoming an oasis of peace, just for them, only in the company of seagulls, lifeguards who adjusted the umbrellas or fishermen, who landed on the beach to bring over fish still entangled in nets.

D: Why is Donna Violetta linked to the Church of Santissima Annunziata, which represents not only an icon landscape of Vico Equense known throughout the world, but the origin and foundation of the religion of the Vican people?

R: For nearly sixty years, every morning, in every season of the year, Donna Violetta looked from the terrace of Palazzo Savarese to breathe the scent of the sea, and was almost forced to turn her gaze to the Church of Santissima Annunziata. For this reason, the Church of Santissima Annunziata symbolizes for Donna Violetta on the religious level her most authentic link with Vico Equense. Do not forget that this temple is a rare construction miracle, nestled in tuff rock like a precious gem, and it has become the ultimate symbol of Vican religiosity and a locus sacer of collective memory.

D: With this novel all Vicans can find out who that mysterious, elegant lady is, whom they have admired for decades, seeing her walking at sunset, even in the rain, through the streets of our historic centre.

R: I truly hope so. The younger generation of Vicans can discover an extraordinary story of love between two people, and between these two people, Fernando and Violetta, and Vico Equense. I hope that young people, through this example of love, learn to love their extraordinary village and to preserve it in its beauty from profanation for ever and ever.