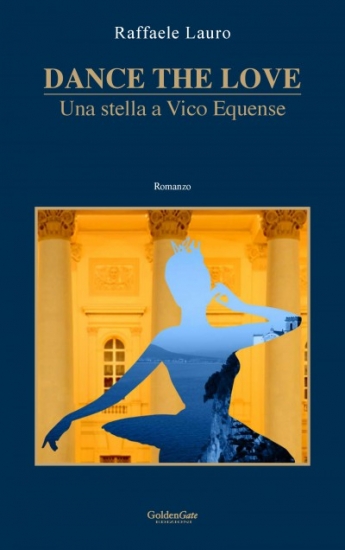 
D: Can you describe the book cover and reveal the important symbolic messages hidden behind it?

R: The book cover summarises the three existential and artistic stages of Violetta Elvin. Her three “homelands”: Moscow, London and Vico Equense. The glittering façade of the Bolshoi Theatre, where she studies and makes her début. Her profile while she is dancing at the height of her success in London, in “The Sleeping Beauty”, with the Royal Ballet of Ninette de Valois and Frederick Ashton. The profile of Vico Equense, where she shelters after leaving the stage in 1956. It is the view, which Donna Violetta has been admiring for about sixty years from the terrace of her palace.

D: This book concludes your beautiful trilogy, “The Sorrentine Trilogy”, which is above all the triple tribute to the land of your origin. Can we say that there is a kind of an autobiographism inherent to the places of the novel?

R: The “eyes” of the three protagonists, the Sorrentine patrician, Marino Correale, the great artist from Bologna, Lucio Dalla, and the famous Russian dancer, Violetta Elvin, are my very eyes, when I celebrate the natural beauty of my land, this extraordinary microcosm of nature, history, culture and popular traditions. However, it is not a contrived operation, since there is a convergence between their feelings and mine, for historical verisimilitude (Marino Correale) or historical documentation (Lucio Dalla and Violetta Elvin). In Sorrento, Lucio writes his masterpiece, “Caruso”. In 1951, Violetta falls in love firstly with the places and than with the man of her life, Fernando Savarese.

D: You confirm that you feel as though your work is an act of love towards places of your origin, conjugated through Dance. In your two previous works, you chose History, Faith and Music for the same goal. Is this, why you chose Dance?

R: I have always loved dance, and ballet. I promoted it when I was young, as the Councillor for Culture in Sorrento. I have always highlighted the bond between Positano and Dance, by remembering Léonide Massine and Rudolf Nureyev. I am an admirer of Roberto Bolle. The circular path of my trilogy derives directly from my religious, philosophical and aesthetic education: as practicing Catholic; providentialist; professor of philosophy and history (Hegel and Croce); heir to a family of Puccini music lovers (my grandfather, Raffaele, and my mother, Angela) and finally in love with the beauty of bodies in motion, the expression of blood and passion. To Love, where our loves live, the terrestrial loves, I attribute the beginning and the end of any route, both individual and universal.

D: When will “Dance The Love - A Star in Vico Equense” be published? What do you expect from the public and from the critics?

R: At the end of July 2016, with the première obviously in Vico Equense, during an evening in honour of Violetta Elvin. The young 93-year-old! Then, the novel will begin its journey through the capitals of dance. The unexpected success of the first two novels comforts me also in terms of the welcome of the third book by the public and by the critics. It is a great, extraordinary, inedible and emotional story of love of art, life and homeland! The people, the youngsters are today more than ever in need of love, dreams and emotion, especially when the stories are true, and not TV fiction. Not to mention the symbolic value of this book for the so called ballet-maniacs (the indexes are a smart synthesis of the whole history of ballet!), and its instructive value for young people, who are studying or aspire to study dance.

D: What does the choice of a bilingual title mean? How was this title born?

R: All titles of the three novels are global for the web, for the search engines, and, additionally, they express their content with subtitles, while being centred on the English article “The”. Sorrento is, therefore, (The) Romance, the land of dreams and romantic love, where you depart from and where you return; Caruso is (The) Song, a song par excellence, the immortal melody known around the world; Dance is (The) Love, the tautological love for art and life. It could also be: Love The Dance.

D: How did you create the character of the protagonist and, above all, why did you chose to write a book about this wonderful Russian dancer?

R: I had some confidential conversations with Donna Violetta. Strictly after 5 pm. I found not only a great artist of immutable class, after almost sixty years, but also a magnetic, charming, brave, refined, cultured and passionate woman, albeit with a reserved and sober life. Her biological rhythms are the same as of the golden age. She walks up the stairs and walks every night in Vico Equense, even when it pours. It is surprising how she still follows everything: modern dance, politics, and world affairs. She maintains telephone relationships with her few remaining colleagues, London admirers and young artists. Although my novel is not and will never be the official biography of Violetta Elvin, it finds inspiration in her life as an artist and as a woman.

D: Can you tell us about different stages of composing this novel? I imagine, it is a fruit of a long and absorbing effort.

R: Two years of recorded conversations (a precious document which will remain preserved!). Then, historical and political research, documentation on the history of ballet, especially Russian and English, biographies of great historical figures, whom she met, testimonies of other characters, among which, the essential one, her son Antonio Vasilij, affectionately called Toti by his mother.

D: Any projects for the future? Have you got any other manuscripts in your drawer?

R: I wanted to rest a little, but when signals are coming to you, as a visionary, you should never neglect them. The next novel will cover the golden age of the Neapolitan song, the late nineteenth century and the first decades of the twentieth century, through one of its major protagonists. Lucio Dalla led me by the hand to this new objective, and I will follow him once again. In an interview on Rai Uno, in December 2001, Lucio said that among the world’s top musical masterpieces of the twentieth century, the first place was not deserved by “Imagine” by John Lennon, but by “Era de maggio”.

D: The frame of your novel is represented by Dance. What is your opinion on this truly fascinating art?

R: Dance is Life. I would make studying dance obligatory in school, starting from elementary school. Nothing forms the character of a person more than the discipline and the strictness of dance. With music, dance represents the most ancient and yet most modern form of art. In the novel dialogues, this topic holds the central place.

D: Besides Violetta Elvin, on what other dancers would you write another possible book if you had a chance?

R: On Roberto. On Roberto Bolle. I admired him often in Teatro dell’Opera di Roma. On one of those occasions, I also met him and complimented him. I am fascinated by his art, but I am also intrigued by the mystery that hides within, his inner world, I sense it to be rich and unexplored. I’ll send him the novel about Violetta Elvin, as a good wish, and I am sure he will appreciate it, because, like all my other novels, it was written from the heart. And Love.

D: Finally, can you give us a sentence of the book that you consider particularly representative?

R: Yes, the summary words of Violetta Elvin: ”Russia was the home of my birth, my childhood, my youth and my professional training at the Bolshoi. England was the birthplace of my artistic maturity, my career and my success as a dancer with the Royal Ballet. Italy has been the home of my true love, my long life and my story as a woman, wife and mother, lived in the intimacy of family, serenity, discretion and simplicity. When I was on tour in Italy, in Milan, Florence, Rome and Naples, in the short time between rehearsals and performances, I hid myself alone in museums, art galleries, churches and picture galleries. The bond with Italy was fuelled by a thousand trips, which we did, Fernando and I, always together, to discover the regions, cities, towns and villages. And it was consolidated later on by the natural beauty of the Sorrento and Amalfi Coasts and Vico Equense. If someone asks me: "excuse me, you have had three passports, one Russian, one English and one Italian, but in which country you feel most at home?", I answer that I feel the citizen of all of them, because I am a citizen of the world. The universal art, for me the art of dance, transforms all artists in citizens of the world!”