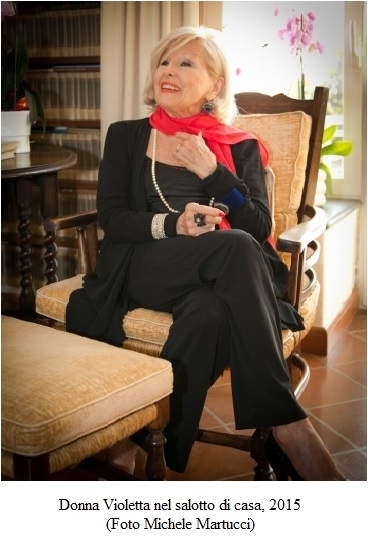 After the publication of the interview by Vincenzo Califano with Raffaele Lauro on the third novel of “The Sorrentine Trilogy”, entitled “Dance The Love - A Star in Vico Equense”, dedicated to the great Russian dancer Violetta Elvin, born Prokhorova, widow of Savarese, to be published next July, after the news of my collaboration in historical research for this work I was hit yesterday with dozens of requests from friends, citizens and readers, to unveil the places most beloved by Violetta Elvin in Siren Land. I do this by interviewing the author again, as my personal tribute to Donna Violetta, whose personality I was “enchanted” with from the first meeting in a role of a sole and silent witness (with the recorder!) of the conversations between the great artist and the writer. I start from my village, Massa Lubrense, and then continue with Sorrento, Positano and Capri.

D: Were Donna Violetta’s emotional roots in the Sorrento-Amalfi coast limited only to Vico Equense, from Monte Faito to Marina d'Aequa?

R: Violetta Elvin’s emotional roots do not just stretch over Sorrento and Amalfi Coasts, but over the whole of Italy with the wealth of its artistic heritage, especially the Renaissance, nurtured since her childhood in Moscow by the stories of her father, Vasily Vasilyevich, cultivated by her in the course of her tours in major Italian theatres, especially in Florence, and consolidated during frequent trips across our country with her husband Fernando Savarese after the abandonment of the stage. Of course, Vico Equense occupies the central place for the life-choice, but the love of this extraordinary artist for our land extends for different reasons to Massa Lubrense, Sorrento, Positano and Capri.

D: Massa Lubrense, my village, is an archipelago of wonderful places. Which of those places attracted Donna Violetta the most?

R: The Church of Santa Maria della Neve, Violetta’s most beloved place at the level of memories, because in this church at dawn of a wonderful day her Catholic marriage with Fernando was celebrated. Because the man of her life rests in the cemetery of Santa Maria della Neve after his passing. Life and love in a plot that I hope the readers will appreciate, which enhances one of the most spectacular locations of Massa Lubrense from the landscape point of view.

D: Donna Violetta in the course of many years visited Sorrento as well. Is there a memorable place that also links her to the city of Tasso?

R: The memorable place exists and it is a place of reference for all the Russians of the past, present, and, I believe, future, in love with Sorrento and the Sorrentine peninsula: the monument-grave at the municipal cemetery of Sorrento, which houses the remains of the Russian landscape painter Sylvester Feodosiyevich Shchedrin, which she had restored by the Councillor for Culture of Sorrento in the early 80s. Shchedrin fell in love with Italy as a child, in St. Petersburg, through the paintings of Canaletto on display at the Hermitage. He stayed in Bel Paese, in Venice and in Rome, until he arrived to Naples and then to Sorrento, and he decided to remain there until his death at the young age of 39. His tomb consists of a small altar surmounted by an arch, under which a bronze relief was placed, which depicts the painter sitting in a hunched position with a palette and brush in his left hand and his right arm held down.

D: From Sorrento to Positano, what unites Donna Violetta with this charming location of the divine coast and with the Li Galli Islands in front of it?

R: In Positano and Li Galli, the artistic history of Violetta and her friendship with the great Russian choreographer Léonide Massine comes to life. He bought the “rocks” of Li Galli in 1924 from the Parlato family from Positano for 300,000 liras with the intention to create there a world centre of dance. Violetta’s bond with the famous choreographer, performer of the Ballets Russes of Sergei Diaghilev, dates back to their collaboration at the Royal Ballet for the performance of “The Three-Cornered Hat” by choreographer Frederick Ashton. In my book, I describe a day spent at Li Galli by Violetta, Massine and Charles Forte, the great Italian-British hotel entrepreneur. A day full of memories of the two artists: from the Bolshoi Ballet School, which they both graduated from, to their collaboration at the Royal Opera House in Covent Garden under the direction of Ninette de Valois.

D: The triangle of Vico Equense, Massa Lubrense and Positano canot omit the Isle of Capri.

R: It couldn't have been omitted, because Capri, along with Sorrento, became the place of exile and residence of the Russian cultural-political colony that became the establishment of writer Maxim Gorky and the Bolshevik school, attended also by Lenin. There is a historical picture on the terrace of Villa Blaesus, portraying Gorky as he watches Lenin and Alexander Bogdanov playing chess. When Violetta's mother, Irene, visited Italy in the sixties, her daughter took her to Capri, to places visited by famous Russian artists, as well as by those who had become in Russia the leaders of the Bolshevik revolution, which overthrew the Tsarist regime.

D: Therefore, Donna Violetta’s story passes through not just the most beautiful places on the Sorrento and Amalfi coast, but also through the culture and history of those places?

R: Certainly. Violetta, like all English people or naturalized Britons, had read “Siren Land” by Norman Douglas and, therefore, when she came to Vico Equense for the first time in 1951 for a few days holiday, and stayed at Hôtel Aequa, she already had the literary knowledge of the places, which from 1956 until today were to become the paths of her soul: Vico Equense, Sorrento, Massa Lubrense, Positano and Capri.